Posted on June 19, 2015 by Rhyd Wildermuth Posted in Capitalism, Gods&Radicals 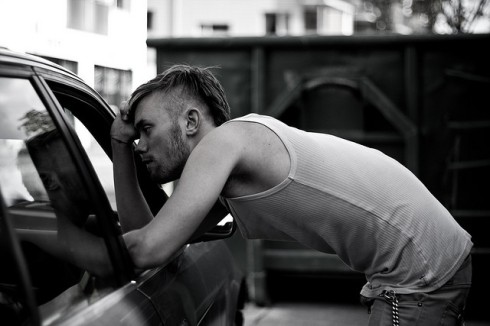 Sometimes, a mad-rush to fill a schedule on an online anti-Capitalist journal suddenly makes you write the most revelatory things:

When I first moved to Seattle, I was mostly homeless.  23, gay, new to a city, with only two friends to rely upon who lived in a suburb.  To find a place, I needed money, and to find money, I needed a job, and all the jobs were in the city, not the suburb.

I slept ‘rough’ many nights in those first few months.  Sometimes on a stranger’s couch, sometimes in an alley, often in a park, once in a while in a friend’s car. More often than not, though, I’d find myself trading sex for a place to sleep, not something I’ve ever admitted in public ’till now.

The piece is on the so-called ‘Sharing Economy,’ and how we’re all renting ourselves out, and many of us are also being pimped out.

And what’s the difference between a pimp and an employer?

It’s only class consciousness that unravels the ridiculous hierarchies we paste onto the different ways we sell ourselves to make a living.  Without class consciousness, you get into some awfully difficult dead-end discussions regarding who’s more oppressed, or who’s more to be respected.

One of the things I’ve noticed about very thoughtful people who don’t acknowledge class–they get into difficult contortions which cause their answers to intractable problems to sound shallow, even indifferent, no matter how much they really care and aren’t asses.

For instance, I don’t think the writer of this post is an ass.  In fact, he’s the only published ‘prosperity magician’ who actually admits the existence of poverty.  And his work on protection magic is very, very good.

But without class consciousness, his answer to the either/or conundrum of so-called ‘First World Problems’ is an unfortunate non-answer.  (By the way, please, everyone–right now: scrub that phrase from your lexicon.  The so-called ‘First World’ includes some of the most abject poverty on the planet…come care for the homeless with me and I’ll show you).

And as I’ve said elsewhere, Das Kapital should be seen as an alchemical treatise.  Marx’s description of crystalization of labor into value doesn’t use occult terminology only for poetic reasons.

And, of course, the real haunting spectre–and the only clear path out of that mess–is the revolt of workers (including the magic-worker, the spirit-worker, the sex-worker) against those who profit from our lives.  That is, our pimps.

4 thoughts on “The Spectre and The Whore”