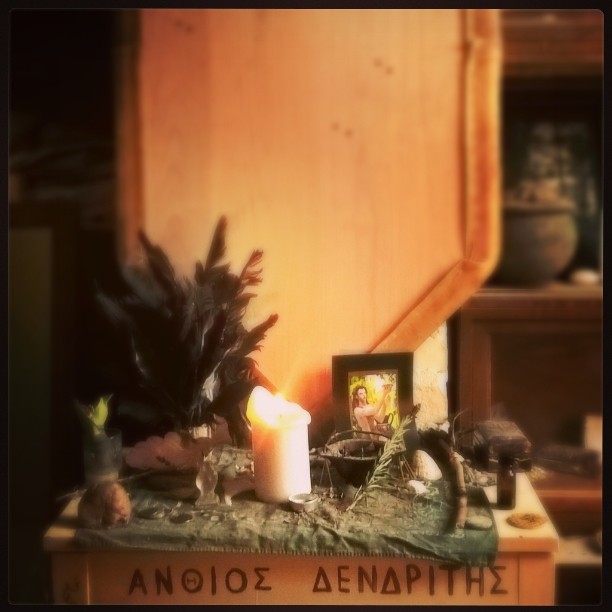 ”Disenchantment” is not the only principle by which we world the earth. The supernatural can inhabit the world in these other modes of worlding, and not always as a problem or result of conscious belief or ideas…gods and spirits are not dependent on human beliefs for their own existence; what bring them to presence are our practices.
–Dipesh Chakrabarty, Provincializing Europe

There’s a little row over giving bullets to an ancient war goddess as offering. Started when a libertarian who makes jokes about people living on government assistance, who was giving a presentation about a god with a cauldron of plenty (irony? nah…we’re incapable of that stuff) was pointed out by a certain heretic (uh…hi!) as having declared the best offering for The Morrigan was a bullet.

Some people probably have bullets lying around, I imagine, especially if you fetishize guns. For others, the process of purchasing a bullet would be initially confusing, say, for the majority of people living in Europe or the UK. Maybe in one of the many war-torn countries of the world where guns and bullets are a necessary condition of survival (mostly because certain warlords are supplied with those guns and bullets by Western Capitalist powers to use against their dissidents). In such places, a bullet’s probably easier to come by. Prying one out of the flesh of your dead child is probably an option.

There’s an argument to be made about bullets as offering, certainly. If a god wanted proof from you how far you’d be willing to go for them, a bullet is a great sign, be it intended for someone else or for yourself. I don’t have much to do with the goddess in question; in fact, every approach she’s made has been both gently and once quite firmly rebuffed (yeah–I take that ‘no masters’ bit as seriously as the ‘many gods’ part).

Would I kill for a god? Nope. And the gods I know are pretty damn fine with this. Would others kill for a god? Well, actually–let’s look a bit further at this.
There’s one line in Asa West’s recent piece on the question really worth quoting:

what we choose to offer to a god–and our reason for choosing it–says much more about us than it does about the god.

She hits on something that’s pretty much a denkverbot in polytheist discourse, and is precisely why I quote Chakrabarty at the beginning.

The gods exist as independent beings from us regardless of our belief in them. But it’s we who actually world them into the earth, and how we world them is dependent upon what we do, who we are, and the sort of world we create around us.

This is what’s going on with Heathens and Gaelic Reconstructionists who insist there must be a racial component to worship of gods. They are the sorts of people who believe in race, and therefore world their gods into the earth racially. The same can be said of people in those same traditions who insist there is no racial component; they don’t believe in race, and therefore don’t world the racism into the gods.

The true offering we give to the gods, which is precisely the same offering we give to any other living being, is this act of worlding. When I make offerings to Arianrhod, she’s not drinking that mead. Instead, by offering her mead or flowers, I am worlding her into the earth through the act of offering those things, but this is only a personal act.

In fact, we could say that the act of making private or group offerings isn’t for the god at all, but as a ritualistic act to world them into our own being. It’s an act of social creation; the god doesn’t actually need any of that shit.

“What is remembered, lives” means exactly this; by remembering, we continue the life past the moment of death into ourselves. My grandfather lives on not because I remember him, but rather, in my act of remembering, I perpetuate his existence. And by telling others about him, I world him into others.

It’s a subtle but crucial difference. It’s also the truth that moves us past the external acts of ritual into the internal truth of replication and creation. You start out with the external altar which becomes imbued with the worlding of our intention. The very act of setting up the altar, the space for a god, doesn’t bring the god to the altar, it brings you to the god, disjuncting the mundane of time and space into something Other.

But eventually, after days or years of the ritualistic acts in which the Other is worlded, you hit upon a really frightening truth. It was more disconcerting to me than any other experience with the gods–the altar isn’t an external shrine in which the god lives at all.

The altar is a mirror. You’ve been the altar all along. The offerings which mattered most were not the pouring out of libations you could barely afford, but the actual act of offering at all. The candles lit upon the shrine to a goddess are lighting flames inside of you. You’re the wax, you’re the wick, you’re the flame for that goddess.

That’s part of the mystery of shapeshifting, becoming what you thought was external to you.

And in the same way, you learn that these external things, what you do in the world, is actually internal to you. It would make no sense for me to offer a god a bullet because I am not the sort of person who thinks the act of killing is sacred. Likewise, no god with whom I co-create would ever ask me to give them blood, because they know me pretty well. I’ll not shed anyone’s blood, anymore than I’d ever hex someone.

Others would shed blood for a god, others would hex someone for a slight.  Again, that’s them, not me. I don’t live by violence, nor return violence with violence. I’ve got a shield on my altar for the Raven King precisely because he and I both know I’m the sort of person who would rather throw himself into harm’s way to protect someone else, the sort of person willing to endure harm to open the way for others.

And therein’s the truth of Asa’s statement. Those who would offer a bullet to a war goddess, or shed their own blood or use another’s, are telling us less about their gods than they are about themselves. And those who would world gods in with symbols of violence or demands for bloody sacrifice are attempting to world something about themselves into their worlding of a god, just like anyone else.

But we should maybe one day have a conversation about what sort of world-full-of-gods we want.

10 thoughts on “Worlding the Gods”