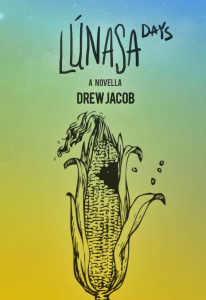 I’ve a thing for writers who’ve learned the poetic art of contractions, enough to forgive ’em for the word “panties.”

I received Drew Jacob’s novella for review just after leaving Florida and just before moving to Eugene.  Somewhere in my itinerant state, the existence of his book fell away from my consciousness until, just yesterday, I remembered it again as I waited at a laundrette.

It’s too bad I’d forgotten about it.  Drew Jacob, who also goes by the name Rogue Priest, has been living a fantastic nomadic life and blogging about it at his website.  I am not a nomad, or wasn’t until last year, so have always been rather fascinated by the ability of some to uproot themselves from place (another hero of this sort, Margaret Killjoy, has been a relentless inspiration).

Drew tells a good story, both in his blog posts and in Lúnasa Days.  There’s a simplicity to his writing and his insights–you’ll find no deep theory or argumentative struggle in his words, and this is no insult.

Lúnasa Days is short.  I read it while washing the six t-shirts, five pair of socks, six pair of boxers, one pair of jeans and two pair of shorts I own after having read a series of essays a friend sent me to edit.  I don’t know how much time it took me, precisely, but I remember putting two extra quarters in the dryer to finish his book, treating myself to fully-dry clothes and the end of his story.

Because his work is so short, I’m reluctant to tell you much of it, except that it’s good.  The rhythm of his writing is compelling, un-embellished sentences without unnecessary words, a simple rhythm which conveys you along the story like the steady pulse of pedals on a bike.  The rare times his prose changes rhythm are almost jarring, but rather than focusing on those awkward sentences, I found myself instead more aware of how seamless the rest of his writing had been.

What it’s about is less important, I think, than what it does and is.  I’ve had a strange relationship with fiction (particularly “fantasy”) since the gods showed up, and I’ve found myself wondering greatly at the place of such genres as Magical Realism within Pagan culture.  But then, here’s this book about an itinerant magician devoted to Apollo in the mid-west amongst cornfields, and it reads more like memoir than fantasy.  More polytheist fiction would do the world quite good, and this is the sort of book that describes nearly perfectly what it’s like to exist with gods and spirits.

It’d be an excellent “young adult” novella except for an unfortunately awkward sex scene, but this is less that such an audience should be protected from these subjects; rather, I’d spare them from exposure to the most odious word in the English language: “panties.”

Likewise, the suddenness of the scenes’ appearance is jolting, and though I would not agree with a reviewer who suggested his writing is misogynist,  the abrupt transition to the sexual act might certainly give some readers the impression that the male protagonist is a little forceful.   But erotica itself is quite hard to write (how many non-childish synonyms for “nipple” can you come up with off the top of your head?). Even more difficult when you’re writing a short sex scene within a non-erotic story, which is why several publications sponsor a “Bad Sex Award” for fiction.

I hope he writes another one.  Actually, I really wouldn’t mind living in a world where more people write stories like this.  Just…not all filled with panties.

One thought on “REVIEW: Lunasa Days, by Drew Jacob”