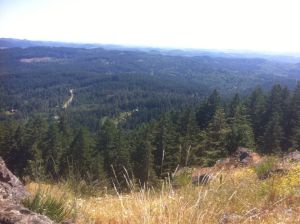 After a week hiatus, I’ve posted another installment in my “Where They May Be Found” series for A Sense of Place. This one–Cernunnos.

So, we’re there at this convention, waiting for FAUN, and the band before is doing awkward and violent hip-thrusts evoking animalistic sex and saying something about Cernunnos and it doesn’t feel right.  Actually, it feels awful.  I’d only met one god by then, and she’s not known for hip-thrusts, but still–it felt like there wasn’t a god there at all, and despite what they said about the horned god being horny or some such, the only arousal I could see where the older unkempt men crowding around and leering lecherously at the young women wearing fairy-wings dancing at the front. In fact, if the musicians were correct about Him, I found myself wanting to have very little to do with his worship.

It wasn’t him, though.

That band was awful, and hardly a good source for Theology. The forest is better.