[A Review of:55 Ways to Connect to Goddess, by Lilith Dorsey] 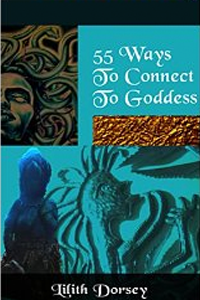 I wrote something of the sort when I’d heard there’d been a backlash against a friend’s review of a very popular Witch’s book.
Anyone who’s read any fairy tale ever knows that books bought at Barnes&Noble which suggest offerings of one’s own blood to mysterious and unnamed beings should be approached with at least a modicum of caution, right?

Calling into question the safety of such a thing, however, got the reviewer quite a bit of anger.  Such is the devotion of some folks to Brand Name Pagans ™ that questioning the opening of veins to beings no-one’s ever heard of is apparently an act of war.  Fortunately, though, the reviewer escaped the fate suffered by another friend of mine, in which the reviewed author wrote a response questioning her intelligence.

The funny thing? It seemed like people were missing a point: negative reviews make a book. No one really wants to read “what everyone’s reading.” In fact, if everyone’s read or seen something and liked it, it’s quite possible I’ll never go near the thing. I was in Paris for 8 days and never once looked at the Eiffel Tower. I’ve lived in Seattle 15 years and have never been atop the Space Needle and only have ever seen the first Starbucks on account of the 4-hour line of tourists I always have to plough through in order to buy my Ceylon from my Egyptian tea-dealers.
In fact, typically, a bad review sticks in the head better than a good one.  I only watched the CGI-drenched film Beowulf only on account of the horrid review of it written by Lindy West, entitled “Waxy, Waxy, Anglo Saxy” (she was right…the characters look awfully wax-like).  I wouldn’t have seen it otherwise.

In conversation, Lilith Dorsey suggested we review each other’s books.  This seemed perfect–she was certain to hate Your Face is a Forest, and I, that anarcho-punk bard who caused such a ruckus with his political analysis of “The Goddess” (I called it “a pastiche”), would certainly need several pots of tea and maybe a few beers to make it through the “newage” (“rhymes with sewage,” says Dorsey, in the introduction) of Dorsey’s 55 Ways to Connect to Goddess, right?

I actually really liked this book.

So—it’s short. And cute. And cunning. Under the guise of 55 ‘simple’ things you can do to get in touch with what most people consider a concept, Dorsey has written a rather subversive work.
In the introduction, she writes:

“I actually envy the skeptics who are trying these techniques for the first time, they will have the blessing and joy of a new experience,” and I must admit that I sort of envy ’em too. Following any combination of these suggestions will pretty much open you up to the very real possibility of actually meeting a goddess, even while thinking you’re doing something cutesy to connect to something you heard about from your New Age co-worker.

Next thing you know, Hecate’s got you helping her lead the restless dead off this plane or Brighid’s got you fighting for housing for the homeless.

And though she use the language of mainstream neo-Pagan therapy, she switches quite often between the singular and plural of “goddess” so many times that it could function quite subtly as a spell. Is there one Goddess or many? Again, from the introduction:

“There are a lot of Goddesses out there. ..This book is designed for people to connect to a specific Goddess like Oshun, or Hecate, to the connect to the universal Goddess representative of all things divinely feminine.”

That is, both, depending on how long you’ve tried step #44

“Learn about a different religion’s concept of Goddess. There are Hindu goddesses, African goddesses, Norse goddesses, Roman goddesses…the list is endless. Some have never relinquished their power and followings, others are worshiped in new and different ways in our modern world”

“Explore silence. Turn off your phone, computer, tablet, excuse yourself temporarily from your family and work commitments, etc. What speaks to you in this silence? If the messages are good, go with them.” [emphasis mine]

And no slitting your wrists required!
If there’s any problem with this book, it’s that there are 3 too many steps. At 52, it could have been made into a 52-week calendar that one could give to the co-worker or relative who wants to know what it is you do or how to find goddesses and you know, full well, that they’re not gonna get it over a short conversation. It’d be kinda perfect to give them “52 weeks to Connecting to Goddess”
But, actually, you should just give them 55 Ways to Connect to Goddess and tell them to get their own damn calendar.

[Your Face is a Forest is now available, and I’m celebrating by telling you to buy other people’s books this month.  Never was so good at that Capitalism thing….]