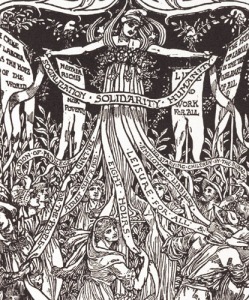 My piece for The Wild Hunt on Sunday was on Paganism as a religion of The Commons:

The new can never replace the old, not fully, until the old is finally forgotten.

And thus the religion of Progress, the faith which keeps us tied to our jobs, our consumption, our obedience to Empire, and our slavish sale of our limited time in exchange for coin. But there was and still is a resistance to this religion, a revolt against the Landlords and Bosses, these priests who called “Progress” the theft of land, the subjugation of women, Africans, and indigenous peoples. And that resistance, that revolt? It was awfully Pagan.

Unfortunately, The Commons is perhaps the most misunderstood concept to us Moderns, because it no longer exists except in fragments.  This is why (besides years of educational propaganda) that people conflate Personal Property with Private Property.

Private Property refers to land ownership.  It’s land that is exclusive to an individual or a group where the owner holds the sole ability to decide what’s done there.  This is the No Trespassing sign or the fenced-off field, the First Nations land suddenly ‘owned’ by ranchers and mine-operators, and the public utility sold off to private investors.

Personal Property should be obvious.  It’s the jockstrap I wear to the shirtless muscle-bear bar (too much information?), the pen I write with in my journal, the altar in my bedroom, the computer I’m typing with.

The Commons is unfenced, collectively-owned lands and goods.  It’s a specific place, but also an abundance.  The Commons were un-enclosed land where people could graze, farm, and play, unregulated land (except for community standards) where the motive of profit did not exist but the logic of need was sovereign.

Besides land, it’s also an activity.  For instance–people have been awfully generous to me, and I share in that generosity to others.  I receive occasional donations from readers; I recently donated some of that to someone who needed it, they’ll likely do the same one day.  Or consider a garden–I always grew more herbs and greens than I could ever use, so I gave my abundance away to others.  That’s The Commons.

Thus, there is an intersection between The Commons and Personal Property.  I cannot wear all the shirts I own–if a friend wants to wear one of them, it is no great loss to me (though if it’s my Many Gods, No Masters shirt, I hope they don’t accidentally bleach it).  Someone needs to borrow my pen, or use my computer and I let them–this is the most natural activity in the world, and the very basis of friendship and kinship.  Someone needs money and I have extra–I lend or give it to them because I cannot possibly use everything that I have, even when I have very little.

This, by the way, is what I meant by the logic of the poor or The Spirit of Poverty.  Not an end to compensation for services or a seizure of personal items; rather, an evaluation of what is needed, what can be shared.  In essence, a rejection of the logic of Capital and Private Property, of accumulation in a world where everyone’s out for themselves.  The Commons is the car-share or the group dinner or the collective–if anything, The Commons is Community.

Also, one particular thing I discovered while researching that piece?  The Pinkerton Detective Agency, once the US government’s private FBI and the primary murderers of many, many workers and miners (most–but not all, Irish) was purchased by Securitas, one of the largest private security firms in the world.  And Pinkerton’s got a website, where they proclaim:

We have over 160 years experience managing risks that could potentially harm your business or enterprise.

They also have information to help you prevent ‘workplace violence’ (by which they don’t mean private security guards killing striking workers, oddly), including helpful tips to identify potential threats:

I sometimes think we’re the only ones giving anyone the benefit of the doubt; the language of Empire is rather clear, and often doesn’t need to hide itself.  We act surprised when Nestle proclaims that water is not a human right, or when a Black man has his spine broken by police, or when Christian fundamentalists declare that gays should be massacred.

Makes me wonder, though, why we give them the benefit of the doubt.  I don’t understand myself why I still use Facebook long after learning they’ve the ability to manipulate algorithms which determine what sort of things we see.  You could easily destroy a community that way, radical or otherwise, by manipulating how frequently things are seen.  If Facebook is the primary means of communicating sudden police interventions, for instance, it’s quite simple to make it so others just don’t see information about this.  They’ve admitted the ability to do this; yet we give them the benefit of the doubt.  That’s terrifying, but I don’t know the way around that except to focus on print and actually-lived lives, de-prioritizing (as much as possible) interactions mediated by corporations gathering our data for profit.

We tend to treat the internet like it’s The Commons; it isn’t, far from it.  For-profit companies make our computers and operating systems (unless you’re using Linux) and run our internet service providers and mine and transport and burn the coal to power our devices and host the servers and transmit the data and aggregate our opinions.  That’s a field of struggle itself, but if we’ve no real-life understanding of The Commons, there’s little hope we’d know what to do with its digital simulacra.

8 thoughts on “The Resilience of The Commons”