Where to begin? Here, I guess.

That’s the view from a stoop in Brooklyn. Sunset Park, to be a bit more exact. Or Sesame Street, actually, when you arrive hauling 40lb rucksack and 15 pound side bag up from the subterranean transit lines to meet a friend and find yourself met by a scene oddly familiar. I felt I knew these dooryards, knew this street, knew the family speaking Spanish and drinking and listening to music just next door. I didn’t, of course, but soon did, as they later laughed as they passed around a pitcher of mojitos about how I’d been so laden I couldn’t hug my friend without falling backwards.

Brooklyn seems so familiar, though I’ve never been here. Perhaps the temporal displacement, the time ‘bending upon itself’ that happens when I’m crossroading and thresholding. Maybe the intriguing link with my traveling companion still on the West Coast. Maybe the many spirits dancing about the neighborhood, the shrines in the rowhouse I was about to enter.

But the next day I sipped tea and smoked a cigarette upon the stoop and watched the people pass, humming “These are the people in your neighbourhood” and fully understood–oh, yes. I know Brooklyn and New York because of Sesame Street. Also those other reasons perhaps, but why delve too deeply so often when another thought, just as magical, had recently occurred?

New York looms large in the American imagination in an odd way; why else would someone who had never been there have feelings and opinions about Brooklyn before ever going? Because, of course, to live in America is to have had an opinion about the largest of its cities. Also, so much American art is actually New York art that it abides and inhabits the creative forms of our minds whether we think much on the matter or not.

And for a young, really poor kid in Appalachia with a black&white television with three channels, Sesame Street depicted a deep place, a magical city where neighbors talked to each other and sat on stoops. You start to believe in such places because your a child and these characters are you’re only friends and along the way you’re getting a bit smarter, but of course I’d never actually been there.

So I arrive, and I’m greeted by this scene from my childhood. People on stoops singing and dancing. Big Bird maybe didn’t drink as much as my host’s neighbours, or maybe the drinking was off-camera, I don’t know. But it was lovely and felt like home. 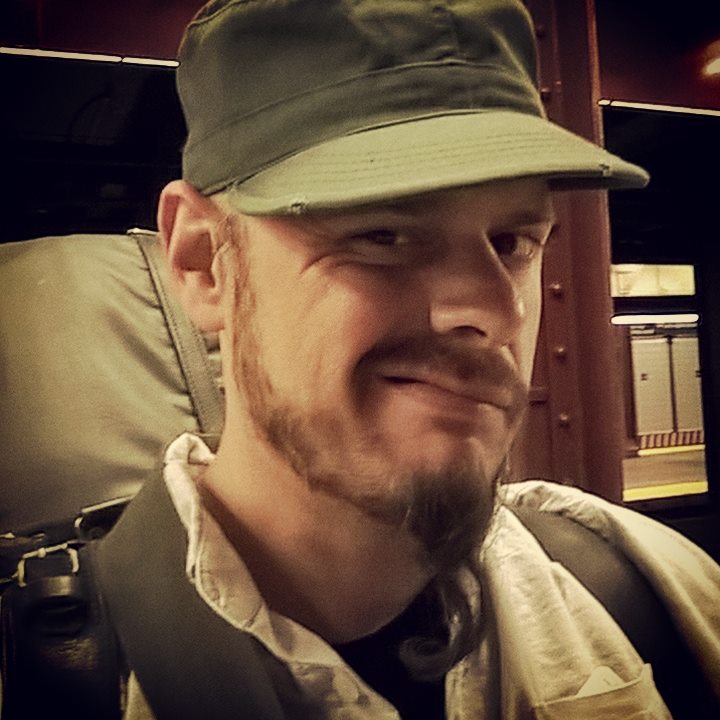 This is me a little before that scene, waiting for a train to take me to Brooklyn after 9 hours of traveling from Seattle. I’d had about an hour of sleep that morning and three hours on one of the planes. None other to speak of.

The last few weeks have been a bit wild. I had to move out of my home for the last year, which I also shared with my lover.  This is him, by the way: 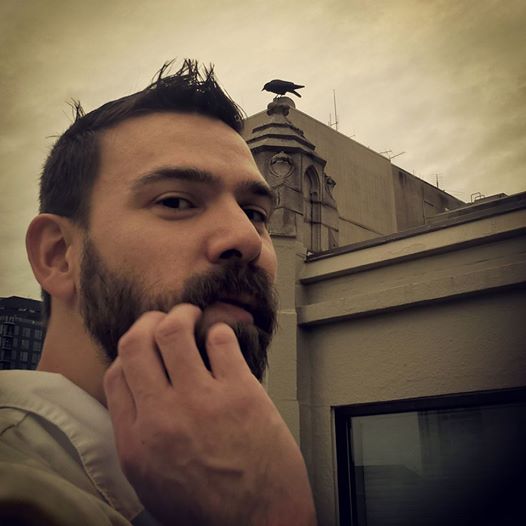 His name’s Anthony. That’s a crow, yes. I’ve written about him a few times over at the Wild Hunt. He’s the man mentioned in “Something Wet Came Padding In,” and again in my last column a few days ago, “Coming Into the Out.”

Part of me wants to write about the rage those two columns engendered in people addicted to the idea of whiteness and priestly authority (I suggest skipping the comments in the latter post), both so intertwined that one can’t help but cringe at the unacknowledged racial aspect. But instead, I’d rather just write about him.

We moved from the home we’d been sharing last weekend, him to a new place further south, I to a temporary stay in a dear friend’s home. Both previous pilgrimages started with some sort of world-dismantling, ends of relationship to a place or a person triggered by the initiation of the journey. I left a home of 13 years for the first pilgrimage; a job and a relationship ended because of the second. This time, I left a home and a job again, and maybe a city altogether.

On Saturday, I woke an hour after I went to sleep, prepared my traveling gear, and he and I went to the airport. We were both exhausted, and though I’m usually quite happy to cry, it’s a bit more difficult when you’re tired and about to leave. But I cried anyway. I damn love the man. And it was a bit odd, that feeling this time, parting a man I love exactly five months after we began.

I’ll be gone for three months. Brooklyn is the beginning, a short stop before a plane to Manchester.

Oh! But have more of Brooklyn. My host, who’s also a writer for Gods&Radicals, lives in the Sunset Park neighborhood of Brooklyn. This is a photo from the top of that park:

We went there the day after I arrived, along with a long walk through Greenwood cemetery.

Here are a few photos of that place: 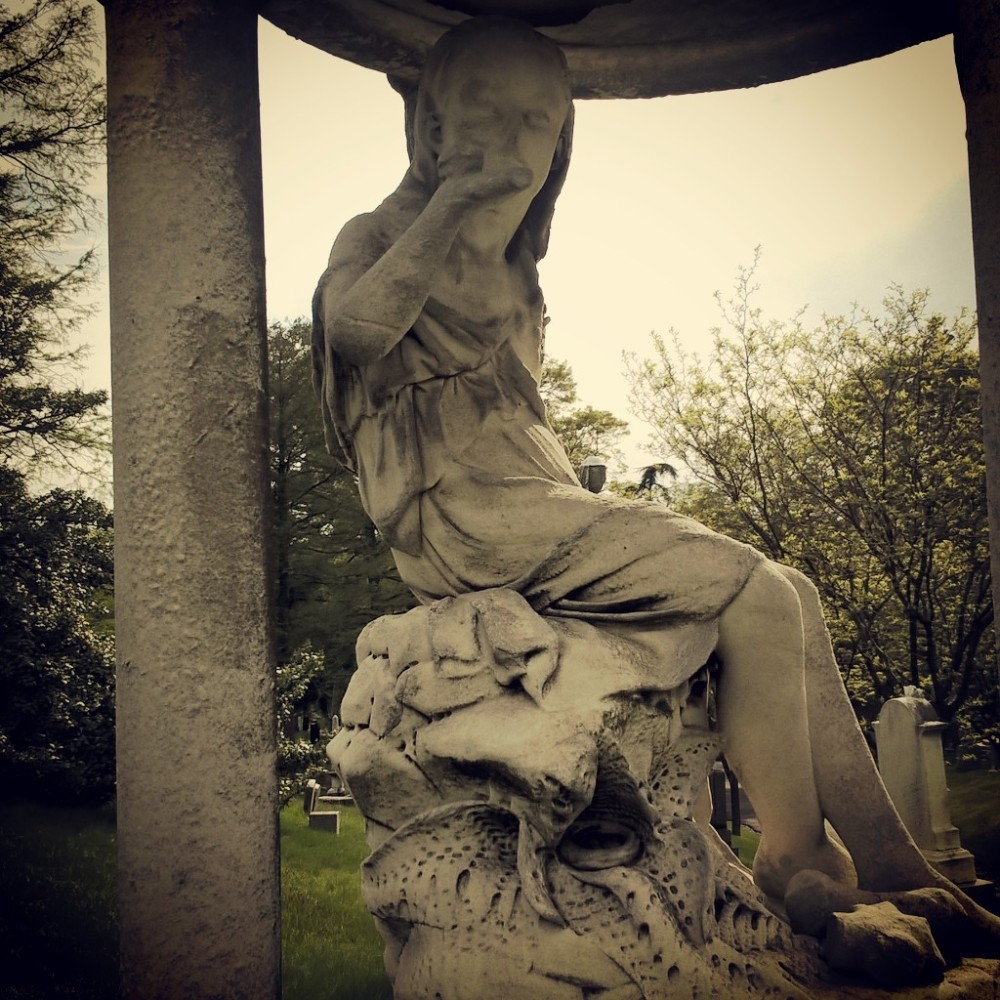 Because of course one goes for a long walk through a cemetery when you are visiting New York for 48 hours.

And of course I want to write lots about the dead, but I’m also not ready to do so yet. So have some more photos: 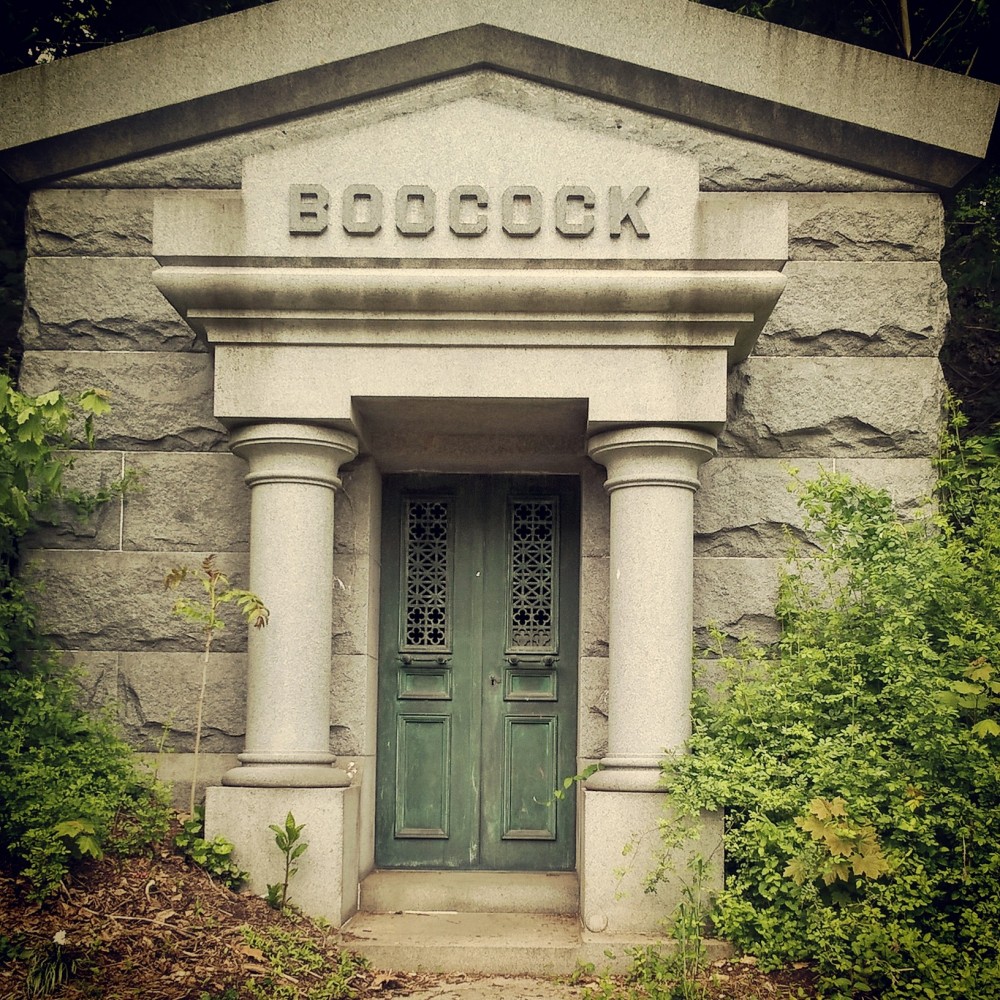 Greenwood cemetery is immense. It’s a park, but also a forest of the dead. Trees everywhere, gravestones pushed upward by roots, some plots completely obscured by the verdant life, just as it should be.  And what also should be are the beehives in the above photo. There are scores of them, apparently a new venture from the group which runs the cemetery. With no disclosure of any awareness how magically profound it is to have such a thing available, the PR statements refer to the grave honey as a ‘nice souvenir’ for visitors.  We joked repeatedly about how much in demand the stuff will be by occultists, witches, and oracles once word gets out, assuming the hipsters don’t buy it all up first.

Another bit worth noting about the cemetery, at least what little I was able to see in 2 hours, is the statue of Minerva atop Battle Hill.: 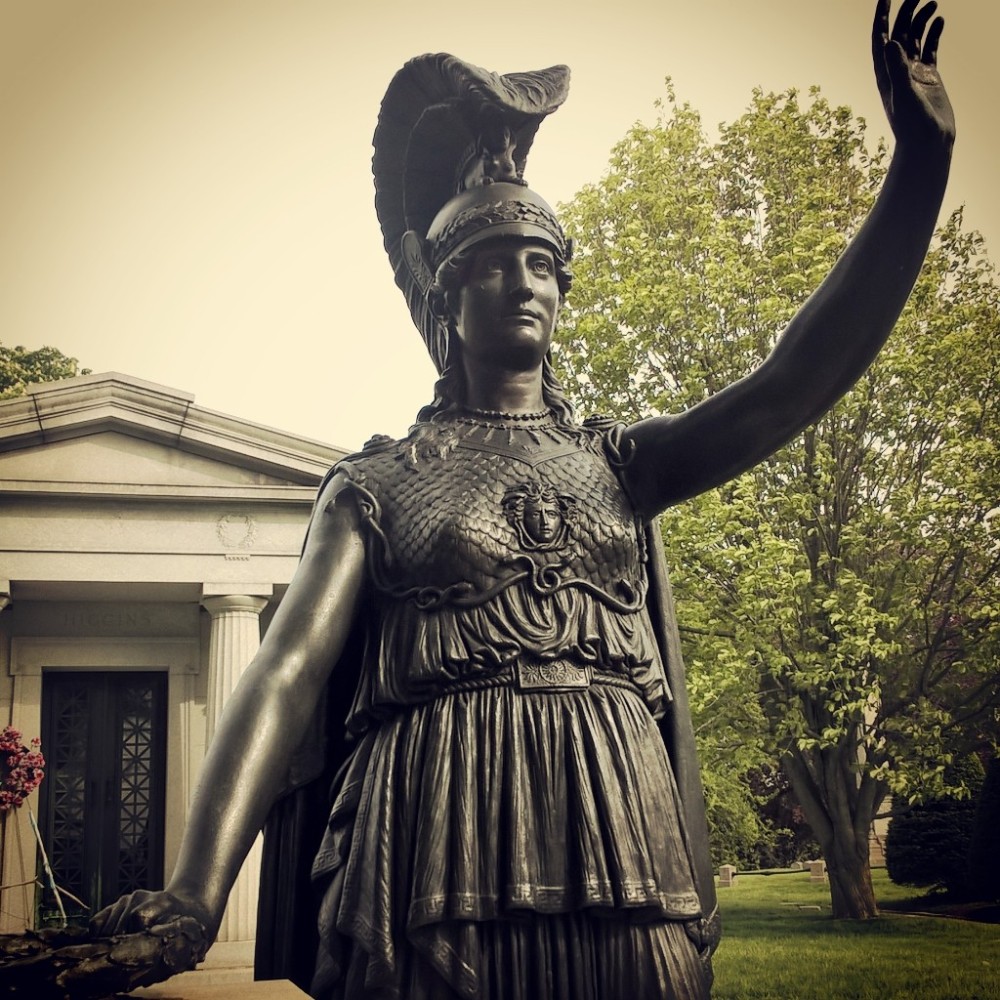 She is waving to the Statue of Liberty, actually. My camera was not nearly good enough to pick up the other statue from across the great expanse, so you’ll have to believe me on this, or go see her yourself.

And if you go, check out her really cute elfin nose. Is it appropriate to say a goddess has a cute nose? I don’t think she minds, anyway. And it’s true: 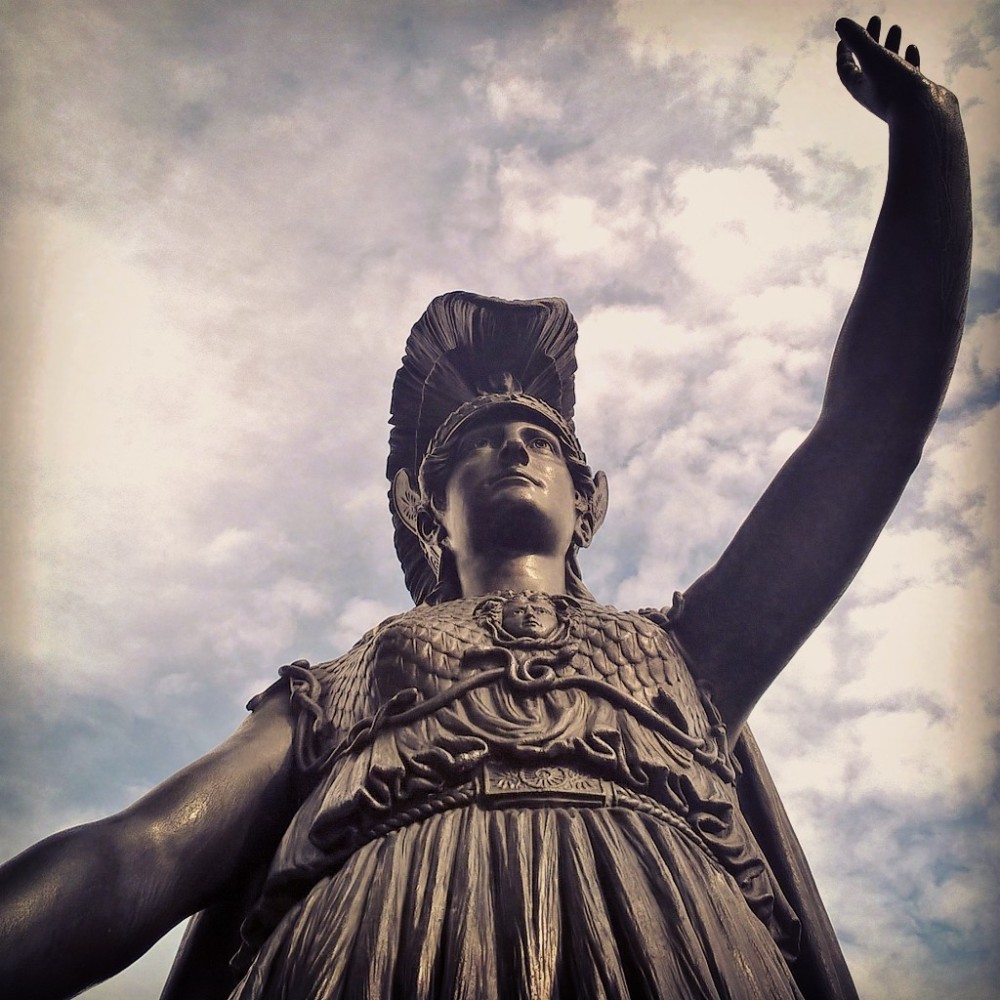 This is only the second day of my journey, and only the first full day since I’ve left. And for reasons completely unrelated to the pilgrimage I’ve started, I’ve not actually written here what I’m up to, where I’m going, and what I’m on about.

For the next three months, I’ll be in Europe. It started with an oath to a goddess. I’d thought that I’d committed to a few weeks traveling with my friend Alley Valkyrie through France. Of course, the whole thing grew pretty quickly, the time allotted for the trip expanding, and the list of places and people I needed to visit lengthened to something so substantial I’d need three months.

On the tenth of May, I leave New York for Manchester in the United Kingdom. I’ll be there for two days, the first of which with my best friend Nick (if you’ve read my pilgrimage journals from Ireland and Wales, you’ll recognise him as the man who took me to Llyn Dinas). The second day, I’ll be meeting the fantastic awenydd and poet Lorna Smithers, who was the editor of A Beautiful Resistance: The Fire is Here.

After that, I’ll be meeting fascinating people while wending my way south before Alley Valkyrie arrives and we both travel to Marseilles.

From there? Arles, a city just north of Saintes Maries de la Mer, where we’ll participate in the yearly Romany pilgrimage of Sara le Kali.

Then, on to the Pyrenees. There’s a dead Jewish mystic/Marxist historian who keeps showing up to quite a few leftist gods-bothered people, including (it seems) many Gods&Radicals writers. We’re following the path he took to escape Fascists in France into Spain just before he died.

After we figure out what he’s been on about, and probably ask him for some advice, and also maybe try to figure out why Welsh psychopomps seem so insistent on introducing a bunch of dead Marxists to us, we head to Asturias in northern Spain.

That’s where stuff gets wild already. Lots of goose-footed queens and goose eggs and weird dreams of electric blue-black waves crashing into me without getting me wet, Mari-Morgans all over.

To be honest, I didn’t really want to do that part of the pilgrimage, possibly because it’s an ‘official’ pilgrimage. We’re walking part of the Camino Primitivo, the original route of the Camino de Santiago, but we’re going past Santiago to Finisterra, following the ‘path of the goose-footed queen to the end of the world,’ etc.

Which made this rather funny:

“This” is a book given to me last night by my host’s good friend and neighbor. She’s from Asturias. She heard what I was doing and just happened to have this book (Asturian Witches) in her house and wanted to give it to me because it felt right. That’s the sort of wild synchronicity you come to expect and never quite know what to do afterward except smile and laugh. Having lived in Asturias, she also kindly gave me a fantastic list of other places to visit there, including a fairy forest and a fairy waterfall.

After that? I don’t actually quite know. But I’ll let you know when I find out.

In the meantime, most of my writing will be done here, rather than at other sites. I’ll likely post here at least weekly, maybe more often. I’ve a few reposted essays coming up on Gods&Radicals. That site’s currently under the fantastic guidance of several interim editors, a needed break for me.

Alley will be writing at her new blog, The Scallop & The Dusk. She’s already got quite a few posts up there about the pilgrimage, and she just released her first collection of essays, Night of a Million Stars. If you’re interested in supporting either (or both!) of us while we’re on pilgrimage, buying her book or mine definitely helps a lot, and we’re also both on Patreon. (Alley’s is here, mine is here)

Be well, all of you!