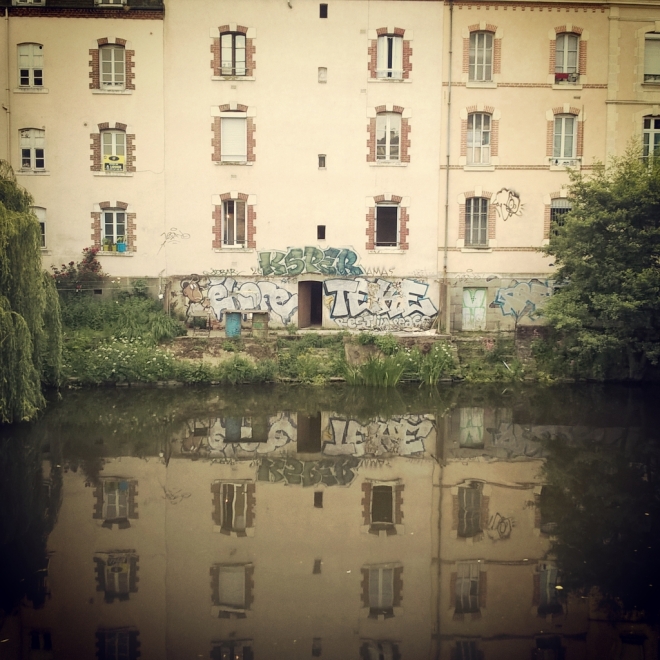 To describe a thing is to give it life.

It is also to give it death.

Scrawl it with ink against paper and it is born,

intone it from the throat and it is now rooted.

The writer, the poet, and the bard all give flesh to spirit with our words. We speak the unspoken, outline the contours of the unseen. We tease out threads from the Other to weave tapestries in the Now, tinting the grey mundane with silver and blue all to show you what colours compose our world.

But just as we give life, we also give death.

To tell you of Rennes, is to tell myself of its death.

No. The city will not die because I have written about it.

The cobbles will remain, the ancient walls scrawled with calls for revolution and beauty shall not fall.

The revelers will not stop reveling, the protesters shall not cease their protest.

The sluggish and kind river shall not pause in its banks, nor will it flow backward because I have described it.

Rooting the eternal into the now can birth a forest, but no tree lives forever.

I shall tell you of Rennes.

I shall tell you of its life, and I let bear myself of its death.

I shall tell you most of all of love. 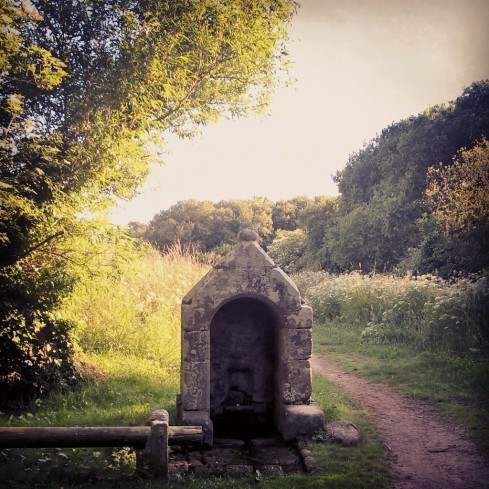 In the present, I am typing an anarchist bar near the sites of two ancient Pagan temples that are now churches. The bar is a sacred place in itself, or definitely for me. It’s the bar where I watched eight straight anarchist men chase after three homophobic thugs who called me and my companion faggots two weeks ago. I call that holy. 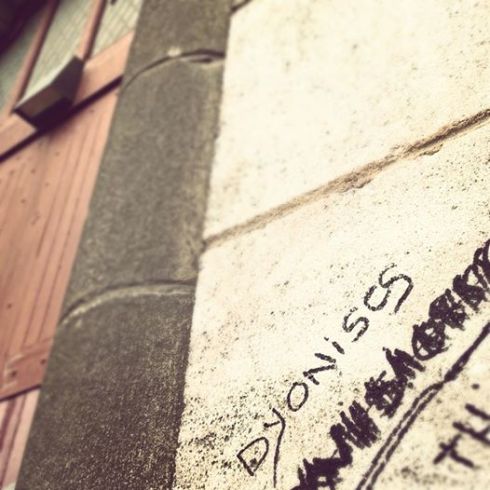 Ah, but I’ve gone all abstract on you, wide ideals painted with very broad brushes, an image only visible from far away. Get close to the tableaux and you can see nothing except color without shape or pattern. Only with distance can the farsighted see.

“Do not open that door,” I said to him, drunk with his sweat, telling him the story of the companions of Brân.  The seven of them, gathered on an island with the severed head of their king, while all time passed by them.

“I want only the present,” he said, his breath on my neck. “It is happy in the present.”

And I’m staring out that door right now, the world aflame, the head falling silent. 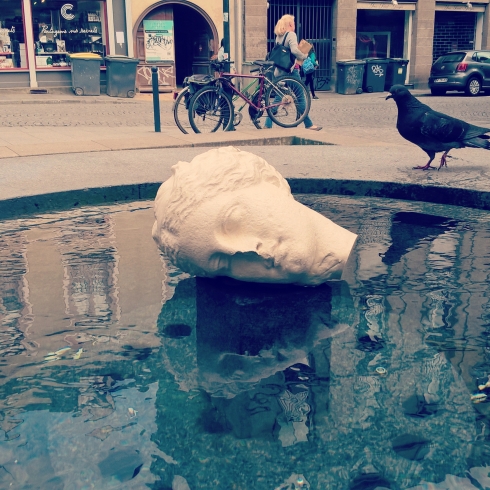 You want to know about Rennes?

You want to know what it is like to live in relentless beauty and burning brilliance for three weeks?

Joy Watering the Gaps of Cobbles

I saw myself laughing in the rain, a bottle of cidre in each hand tipped downward in offering upon the stones.

I could not stop laughing, it was so funny.

I could not stop laughing, it was all joy.

I could not stop laughing as the dragons–the dragons that emperors and presidents, CEO’s and politicians, kings and priests all claimed to conquer–lapped laughingly what we fermented for their revolt.

I could not stop laughing, and shall not, even if eructations of mirth shatter my bones and rend my flesh.

I am made of this place.

I Wrote of This, in Semen, Ink, and Soil

We left the train station. I carried my bags with my friend to his house, my feet not needing my eyes to find their path.

By the river, past the canal, past the second canal, down the alley to where he stood, smiling, his cat hunting in the warm evening.

“Rhyd,” he said, inviting us in, showing us his books his totems his dazzling life in echoing light as old stones called in descending night.

Night only of dreams, the night of fading warmth you remember from dreams you could not quite remember the next morning, only the scents, only the whispers, only the hollows of far-off trees in which spirits smile knowing you are safe.

I dreamt that night, not of night but of spirits, animals and not-animals asking me if I would be what I would be for the one who drew them from the Other. I said, “okay,” before I said “Okay” to him, before he said “Okay” to me.

Like the scrawls in notebooks I forgot to bring, mouldering likely now in boxes I may never open again, words in ink borne of sorrow and hope: this stone, this fountain, this square.

I knew it before, and waited, and was here.

Even Ghosts Get Flesh

The band was good. Better than I’d dared hope. Second night, in the Marquis de Sade, VvvV.  I watch his joy, I smell the forest in his shirt.

I sniff his armpits, drinking Bonnets Rouge and laughing, thinking, that this is all I’ve ever wanted.

I’d walk these streets as a ghost, haunting the edges of bars and clubs, listening to the laughter and music spill from spaces warm from light and life.

Me, by the threshold, listening.

Me, by the threshold, dreaming.

Me, now, bass felt in the root of my soul while I glance his way. I light a cigarette, I light his.

“Who lights another, sodomizes another” he says, an old Breton invitation, I think.

“Okay?” I asked, striking the flame.

“Okay,” he answered, pulling me onward to the closing hour of the bar, to be invited in after.

Remembering Before What I Will Remember Later

You can have so many déja vu that you can start slipping between them.

I remember this, seeing the circle of women explaining how strong my arms were when I was another woman and not myself.

I remember this, fucking a man years ago and seeing another face.

I remember this, his name played on my lips months ago.

I remember this, how my fingers played along the muscles of his back before we’d ever touched. 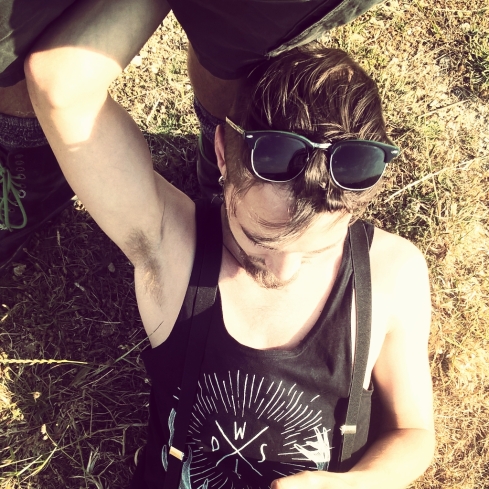 “You are always forgetting,” She’d said, there on that mountain.

I am always forgetting, I’d once said, before that arcing dancing silver.

Oh, Arianrhod, I remember, there in your timeless castle, waves lapping against the coral as you return to the sea.

I remember the lightning, the voices, the secret name and the book of the stars, here, later, from long before and again.

He’s beautiful, I remember, from later and before and ever.

Enemies of the State, in Love

I am watching, drunk.

Outside the bar, named for the Red Bonnets, the rebels ask for wisdom.

Witches pulling cards for Anarchists lately come from smashing the state is a dream I used to know, and I smile, and I watch.

Alley all but dances as she reads for them. Fading are the memories of the Fascist threats, the cloying darkness of tyrant priests, the stifled wonder at the Other.

He smiles and drinks, turns to me and whispers and we’re together and we’re all but fucking on the street while the other rebels laugh, while Alley doles wisdom from open hands.

“Faggot,” say the boys who pass us by, and we almost don’t notice ’till the rebels shout them down.

“Faggot,” I whisper to myself, rolling my sleeves.

How the Beech Shook in Welcome, There By The Wells, There After the Beach

(A trip to Carnac)

3 years ago I lit the fire and waited, watching wind whip through trees across the waves of Morhibund, the year after they came to tell me to come.

3 years ago, the next morning, I tied together the branches and regarded, there, the place I’d seen the night before.

3 years ago, I said farewell. 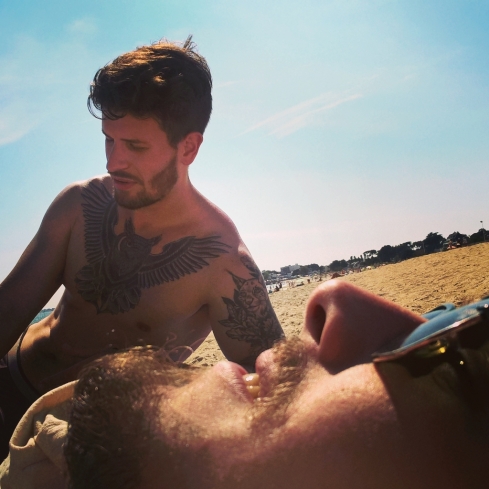 We’re there, now, on the beach. Carnac, after the melted ice cream, shirtless. We’re what California dreams of, and Florida, but the march of power from where all wealth comes crashes through my groin up towards the stones behind me and I smile.

Atop a tumulus, then, mounted by St. Michael. So many dragons to conquer, so much land to subdue, but Michael failed here.

Shirt inside out and backwards, ascending with face away, the Korrigan quieted.

No moules this early, and Sainte Barbe’s closed, but the Beech shakes in greeting.

I cry, walking to the wells. 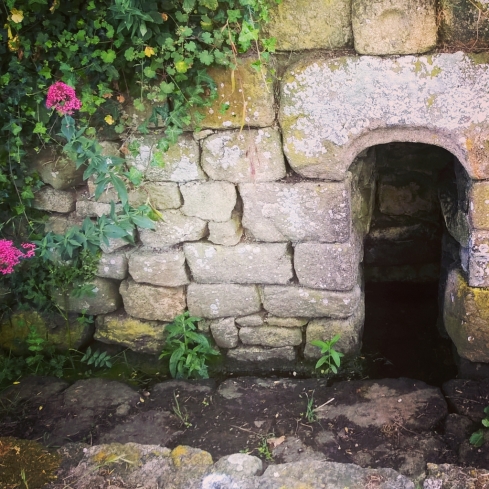 I cry, the candle lit. 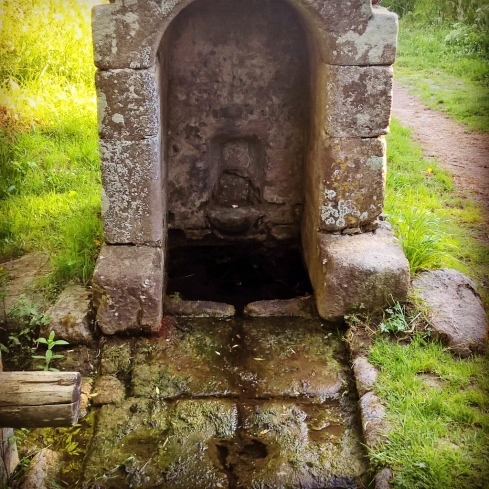 I am so happy.

“You are so happy,” he said, gathering Mugwort from the sacred place for his garden.

They said ‘okay,’ I said to myself.

(The Uprising of the Earth)

Banks are smashed everywhere in Rennes, and people are happy.

Soldiers in body armor stared us down as we passed, and I smiled about him.

The morning I woke to the helicopter I still smelled him in my beard.

Hello, you queens of the land.

I heard them speak when I arrived.

I heard them speak when I slept.

I heard them in the smashed-up banks and broken tellers,

in the cursive scrawls on pretty walls.

I heard them elsewhere, too, in the city to the south, and spoke to them there.

“Confuse the police,” I asked. “Give strength to your people.”

“The spirit of Nantes!” he said, when I told him where I’d met her.  “That’s where she speaks.” 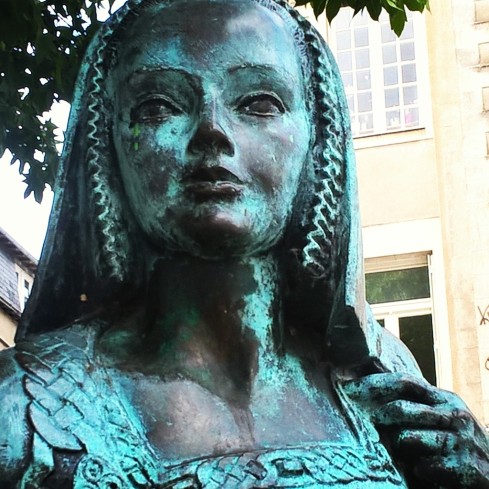 And another in Nantes, too: 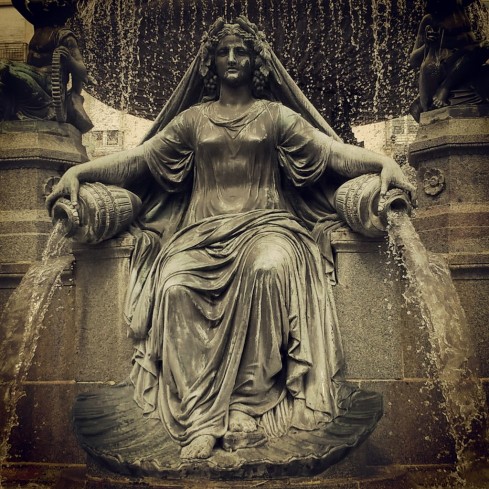 (Love Song For A River Goddess) 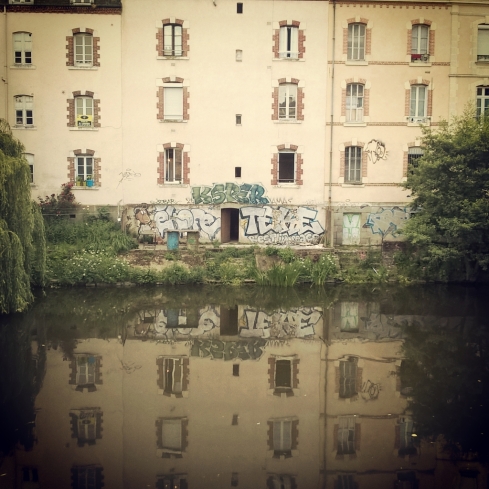 “But she’s gorgeous,” I replied, and suddenly understood.

She is all reflection.

She is a home for all your tears

and a reason to smile after.

Where Magic Wakes, And Laughs

(And You Desire What You Are)

(And Laugh, Waking To Magic)

(And Laugh, In Love With Him)

The rest is for me.

Across Water Are Other Memories (Manchester, May 12-13th)

What We Are Becoming, Waiting (Shrophire, May 13th-15th)

A Language of Growling Earth (Bristol, Bath, May 15th-May 18th)

We Headless Ones, Speaking (Perpignan, Toulouse, The Pyrenrees, May 27th-June 2nd)

Want to help? Purchasing copies of my books (available in print or digital) or becoming a Patreon supporter will keep me fed and full of stories, as will one-time donations. And thanks!!!

2 thoughts on “When Magic Wakes, And Laughs”