A recent article in the New York Times details a controversy in Norway around….a sweater.

Designed at a time when public interest in Viking culture is experiencing a renaissance, the theme for Norway’s Alpine ski team uniforms this season is “the Attacking Viking,” a homage to the team’s nickname. But the sweater features a symbol known as the Tyr rune, which neo-Nazis want to claim as their own….

…the presence of the Tyr rune on the team’s sweater design was enough to raise alarms. Norway’s security police have warned of the rise of a small but politically extreme and potentially violent group called the Nordic Resistance Movement, which uses the Tyr rune in its branding.

Tyr (or Tiwaz) is a Norse rune associated with the god Tyr. It’s also a letter, and a symbol, one which holds power for many. You can’t throw and read runes without it, anymore than you could read Tarot without the 5 of swords or spell “Little” without a ‘T.’

The choice to include Tiwaz/Tyr on the sweaters of an athletic team is a good one. You put runes on things because the runes mean things, invoke qualities you want associated with them. Fascists who put the rune on their clothing are invoking that same power…and because fascists also do it, now no one else is allowed to.

Beyond it being a bit laughable that people are arguing over an article of clothing more associated with kindly old grandmothers than fascists, this matter mirrors quite a few more serious controversies in recent months all triggered by the rise of fascist and nationalist groups in liberal democracies everywhere.

Many of these controversies relate to the symbolic. Are red boot laces racist? Are the runes fascist? Is it okay to wear a polo shirt? Should indigenous peoples, pagans, Hindus, and Buddhists still be allowed to use the sunwheel? But the more important ones have to do with ideological and political positions: is it racist to be against capitalism? Does opposing globalisation make you a fascist? Does questioning identity politics mean you’re a white supremacist?

These conversations get exhausting, because the conclusions people reach have more to do with their own rigid ideological and faith structures than they they do logic or even the ‘intersectional’ political frameworks they claim to invoke.

Rigidity makes things fragile and easily broken. A sword made of rigid steel will shatter against an opponent, which is why they are tempered. Buildings constructed to stand fast against the wind or earthquakes will crumble. which is why they are built to shake and sway. The human body is not rigid; bones are jointed with soft tendons and fluid to withstand stress.

The same cannot be said of our ideological frameworks, especially of late.

We see this most frustratingly on the political left than we do on the right. Holding space for nuance, complexity, and multiple meanings has become a foreign concept for the left, particularly many antifascist and social justice writers. Something is racist or it isn’t, fascist or not, echoing the same either/or dichotomy proclaimed by George W. Bush in his declaration of war against the world:

“You’re either with us, or with the terrorists.”

How did it get this way? How did an entire movement with a previously deep intellectual tradition whose stated goal is justice, equality, and a reduction of oppression become as rigid as fundamentalist Christians? I don’t know exactly–no answer I’ve considered seems to suffice.

But I suspect shitty self-esteem has a lot to do with it.

The “left” has accomplished remarkably little in America during the past three decades. It failed to stop multiple wars, watched its unions (already deeply corrupted) crumble, rolled over and played dead against the Patriot Act, made only tacit signs of resistance to the militarization of police forces. But most of all, it failed to turn the few massive movements to arise these last three decades (anti-globalisation marches, anti-war protests, Occupy, Black Lives Matter) into anything more than nostalgic memories. No change has come from a single one of these movements.

What is the “left” doing now? Well, they’re doing “social justice” by posting on Tumblr and sharing articles from Everyday Feminism and (the aptly named) The Establishment. They’re “resisting” Trump by urging people to vote for whichever candidate the Democrats put out next and painting all the ills of American society on Russian interference. 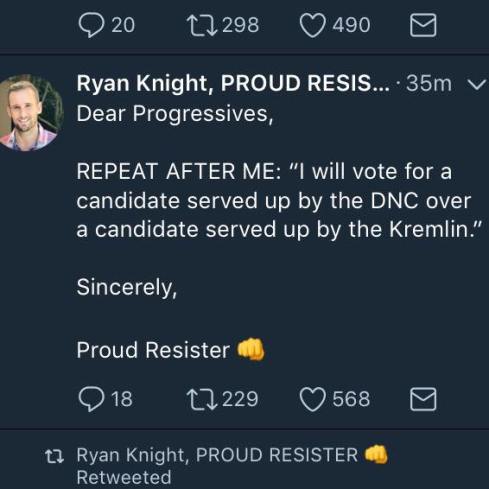 The only thing the “left” is doing now that’s worthy of the name is the work of anti-fascism. But here this is only qualified praise, for despite the mass mobilizations against the alt-right in Charlottesville and Berkeley, again nothing is actually coming out of these moments. Antifascists have been great at articulating what they are against, but what are they actually for? What alternative is actually being offered against the increasing influence and power of the alt-right?

Tragically, antifascism, social justice, and anti-Trumpism have served as a way for the American left to hide from the fact that they have failed at everything else the last three decades. And they’re failing at this, too.

The roots of this failure can be seen particularly in the rigid, fundamentalist dichotomies which arise around ideology and symbolism, all born from the failure to understand (let alone acknowledge) that there’s a deep problem with the Empire in which they operate. Certainly, American leftists are keen to talk about American imperialism and rail against colonialism, but again (like so much else), this talk obscures the fact they’re not actually doing anything about it. Where’s the radicalization of soldiers? The mass blockades of ports and transportation networks to stop American expanse into the middle east? Large-scale strikes against oil corporations who exploit the global south?

If you haven’t seen them it’s not because the media doesn’t cover them. They’re not happening.

A left which refuses to act against the rich and the state is not a left at all. What it is, I don’t know. Roleplaying, perhaps, but not even the live-action versions, but the twitter feuds and tumblr-plays where each person is the protaganonist of their own revolutionary fan-fic.

Here again, we might look to the ideological rigidity of social justice frameworks as a hint of why the left is so content not to act. Rigid things not only do not bend and sway, are not only not flexible and resilient, but they do not move at all. A corpse is rigid and cannot be compelled to act no matter the brilliance of an internet meme. So, too, the paralyzed–those from anxiety and fear as much from physical injuries.

In attempting to come up with a perfect, pure ideology dividing the world between oppressive and oppressed, racist and anti-racist, fascist and anti-fascist, -phobic and -positive, the American left has become perfectionist. And it’s easily forgotten about perfectionism that most who suffer from it never even start anything. The perfectionist says, “If it can’t be done perfectly it shouldn’t be done.” It’s an excuse not to act, a self-apology for lazyness and inaction. A group that isn’t intersectional enough shouldn’t be joined, a writer who hasn’t made all the pre-requisite confessions of faith in social justice must not be read, an action without 100% guarantee of success should not be tried.

These excuses for inaction especially extend to ‘purity politics,’ and here’s where anti-fascism fails the most. Symbols and ideologies which have in any way been wielded by any fascist group anywhere must not be touched again. Like the purity laws in Leviticus which called for holocaust (total annihilation) offerings of conquered peoples who might infect the pure Hebrew religion, laws which called for the destruction of anything potentially tainted, antifascists are quick to consign any sacred symbol of any people (such as Tiwaz, the Tyr rune on those Norwegian sweaters) to the flames.

More tragic than the antifascists’ war on symbols is their war on any political stance not fully gospel in the church of Antifa. Opposing liberal democratic governmental organizations such at the European Union, questioning the benevolence of the archons behind globalization, or even suggesting some poor white people might still be brought into an anti-capitalist politics means you’re problematic at best or, more likely, soon to go over to the “dark side of the force.”

Sorry for the Star Wars reference, but you’re going to get another. Because the antidote to this fundamentalism is perhaps best seen in a quote from “The Last Jedi,” a re-iteration of something Pagans, indigenous peoples, and many historical resistance movements have always believed:

“That’s how we’re gonna win. Not fighting what we hate, but saving what we love.”

Purity and perfectionism are both goals of the person who hates. Purity is what the Nazi’s wanted, and white nationalists–lands and blood-lines free of the corrupting taint of anything not lily-white. Perfection is the bludgeon of the brutal father or the over-bearing mother, angry their child is never good enough. Purity and perfection want destruction of difference, a cleansing of groups and ideologies and the land of all which does match an impossible ideal. Containment, exclusion, shame: all come from a hatred of anything touched by the impure.

You can’t stop fascism that way. You can’t even stop impurity or imperfection that way.

What would a left no longer obsessed with purity and perfection look like? One no longer so rigid it cannot act? One which knows it can win not by focusing its attention and energy and effort against everything it hates but finally trying to save what it loves?

It would hold to what is beautiful in humans, including the symbols humans create to express themselves. It would re-enchant a disenchanted world, embrace what is sacred to some without making it sacred for all, and create new sacreds.

It would seek to elevate things of meaning, even if that meaning is not our own.

It would transform the fears and anxieties of those watching Empire crumble around them into return to joy and desire.

It would encourage creativity, flexibility, resilience and multiplicity like any eco-system, rather than purging all difference until what is left is an easily-destroyed monoculture.

It would build the world it wants, knowing that world will one day change too.

And it wouldn’t freak out about a fucking sweater.

4 thoughts on ““Saving What We Love””