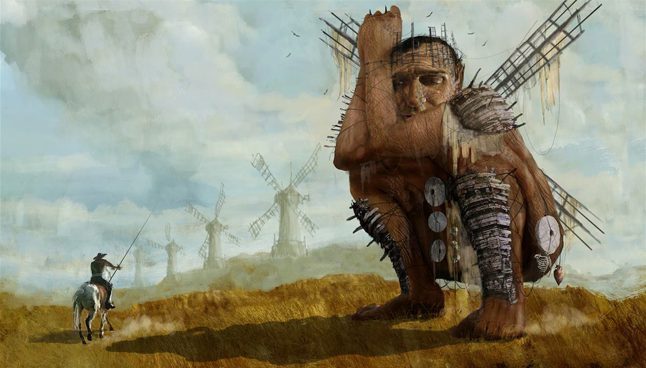 The sun is filtering through branches into the window of my bedroom, light dappling across the walls and illuminating my sadly-empty bookshelves. I’m listening to angry medieval-punk music, laying on my bed, staring past this screen at the play of yellow light through my room. It’s a peaceful scene, and I would otherwise be in that peace, fading along with the day into a calm Breton evening.

But notifications that people are talking about me keep coming through my phone, and because I don’t know how to turn them off I’m instead uneasy, disquiet, and deeply exhausted.

Those notifications are telling me that people think I’m a fascist, you see.

The irony is a bit hilarious, I guess. Two years ago similar notifications assaulted my private space from people certain I was a Marxist demagogue bent on destroying Paganism, one who labeled everyone who wasn’t “left of Bernie Sanders” a fascist.

I’m often fond of saying (after Walter Benjamin) that history doesn’t repeat itself, but it’s full of repeating forms. And here, witnessing this from another country, I marvel at how the form of the internet crusade repeats again, regardless of content. Before, I was a witch-hunting communist out to steal people’s gods. Now, I’m a crypto-fascist white nationalist out to lead astray the devoted from the churches of social justice.

The particular essay that has people all in foment, frothing spittle from their righteous mouths, is a critique of gender and racial essentialism called “Good White Men.” You’re welcome to read it–I’m rather proud of it, actually, and wouldn’t change a thing.

I am hardly surprised that some American devotees of identity politics find it offensive. Some apparently have not yet discovered that there are leftist critiques of identity politics (and thus assert I must actually be a fascist), while others make qualified admissions that there are problems with American social justice but there is still something deeply dangerous about my words.

The essay directly challenges what I consider to be the crucial error of liberal identity politics. That error: it classifies males and whites in an alpha-oppressor class in order to outline hierarchies of oppression. That is, “white, cis- heterosexual able-bodied men” are the cause of the oppression of all others within capitalist society because of the privileges granted humans within those categories.

I am definitely not the first on the left to criticize this constellation. In an oft-ignored essay called “The Elusive TWOC,” Alyssah Pariah (herself a trans woman of color), states the following:

Many social justice advocates, ‘warrior’ is a pejorative in this context so I won’t use it, are well intentioned when they use the suffering of trans women of color to decry systems of oppression. Again, I know they are well intentioned, but they do not speak for me.

They go on about TWOC voices being ‘centered’. Well here it is. Center it.

Focusing our ire on people who receive privilege instead of people who dole it out is a losing strategy for ending oppression. This idea flows from post-structuralist academic theory that sees collective struggle against domination as largely misguided; That locates interpersonal interactions as primary sites for transformation. Smells like rugged individualism to me. Tumblr has taken this heady theory, and parsed it out for disaffected users to reblog. How convenient for people in power. I imagine Goldman Sachs loves this garbage.

Such a critique runs counter to all the dogma of American social justice politics, where each person is to dismantle or at least “check” their privilege in order to build a better, more fair and “socially-just” society. But of course the people running Goldman Sachs don’t have privilege–they have power, and wealth, and also much more say over who gets oppressed than some white male construction worker who will never read Judith Butler.

To bring such a discrepancy to the fore, however, is to disturb the foundation of Social Justice “radicalism,” which at best might one day hope to force Goldman Sachs to add more female and Black employees, but cannot actually ever end the reign of the Capital which such investment groups wield in the destruction of peoples lives. The lives that Capital destroys, by the way, include not just women and people of color, but also the lives of white males as well [next predicted internet crusade: “Rhyd just said “all lives matter“].

Therein is the point of my essay. The assertion that one section of the poor which Capital exploits must be held to account (or as the person said to me in that cafe, “be shot in the face”) before other sections of the poor can find liberation is precisely why no leftist struggle in the United States has come even close to threatening the powerful.

Such failures are directly linked to the refusal of social justice adherents to articulate any coherent criticism of capitalism. Instead, to their view it’s the fault of all white men (whether they be Donald Trump or a homeless guy) that a trans person of color can’t afford her rent or groceries, a ressentiment repeating the form (though not the content) of the conspiracy theorist.

This recent paroxysm of internet righteousness will no doubt end as all the others have: entrenched certainty that I have been proven to be something I am not (proto-fascist, white nationalist, or whatever they’re currently saying), more nuanced reproaches (“you picked the wrong hill to die on,” “I’m not saying you’re a Nazi but you’re problematic AF”), and of course an increased distaste on my part to even engage in public writing. And just as in previous crusades, I’ll no doubt receive a slew of apology letters from people a year later,  ever-so-contrite they accepted this narrative rather than thinking critically about my ideas.

But what’s most tragic of all is that Capital will grind on unchallenged in my former home, the United States, because it’s much harder to organize people against the capitalists and their state than it is to smear a leftist as a “fascist.” One requires actually doing real work and addressing the material conditions of the poor; the other can be done with just a tweet.

6 thoughts on “Notes on the Latest Crusade”